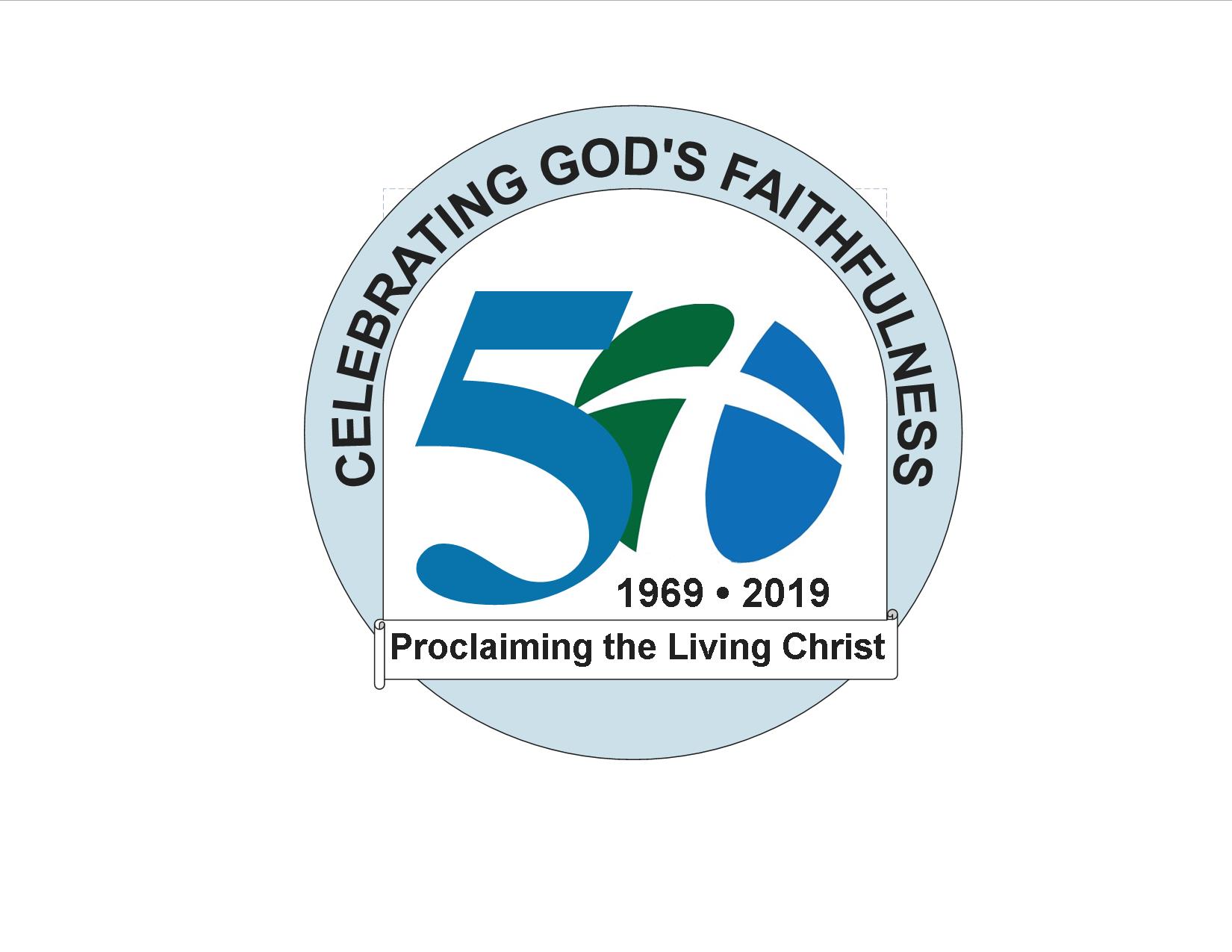 On the evening of February 23, 1969, the first worship service for our church was held in thebalcony of the Frontier Hardware Store in Chanhassen with Reverend Klemp officiating.  Inattendance at this service were 140 people.  Following this service, 54 children were enrolled inthe newly organized Sunday School program. This early beginning of Living Christ averaged 100 people in attendance for the next three months. 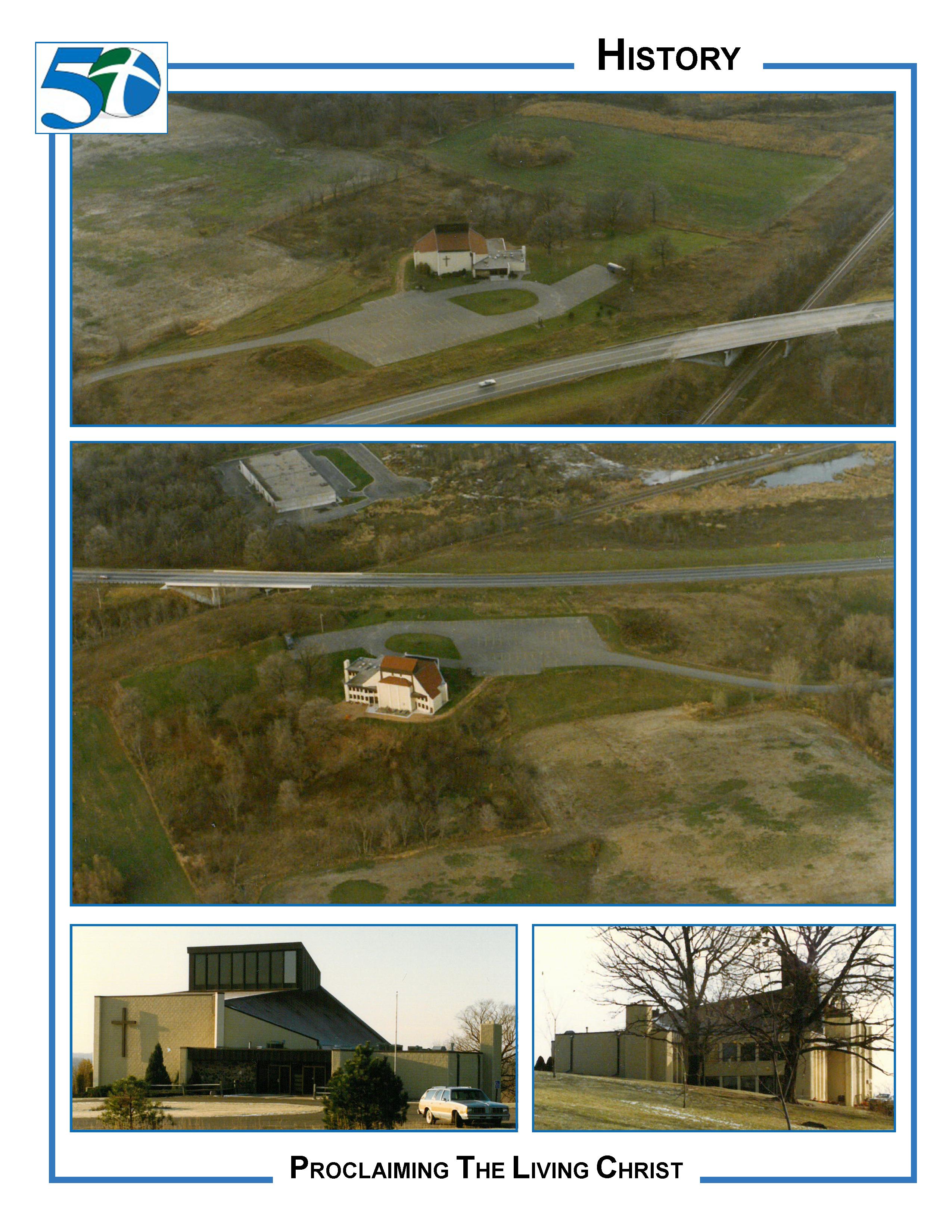 The first pastoral call of this new mission church was accepted by the Reverend Dennis Lorenz on March 6, 1969. The call was to develop a new Lutheran congregation in Chanhassen. A parcel of land had already been purchased by the MN South District in 1967 just south of Highway 5 and west of Highway 101 in Chanhassen.

Living Christ worship services fifty years ago were moved from the Frontier Hardware balcony to the Chanhassen Dinner Theatre in their banquet rooms, courtesy of Herb and Carol Bloomberg, owners of both Frontier Hardware and Chanhassen Dinner Theatre at that time. Worship continued at this site on Sunday mornings until the new building was completed in 1971.  Reverend Dennis Lorenz was installed as the first pastor of The Lutheran Church of the Living Christ on May 18, 1969. A parsonage was purchased for the new pastor on May 2, 1969, at 8005 Cheyenne Ave. in Chanhassen. (This parsonage was later sold to Reverend Lorenz in 1974.)

The name, “The Lutheran Church of the Living Christ,” was chosen June 15, 1969, after two Sundays of balloting. The congregation felt “Living Christ” expressed their purpose as Christians, believing that Christ lives in each of us and that Jesus Christ is the Living Lord of His church.

September 2019 - we celebrate 50 years since our church was chartered. On this charter were 147 names, including children who signed the original charter as well. (Unfortunately, this original charter cannot be located.) Officers, a constitution drafting committee and a building committee were installed on September 14, 1969.

The first Voters’ Assembly of what was to become The Lutheran Church of the Living Christ was held on November 19, 1969, and the voters agreed that women should vote in this newly formed church. This was believed to be the first congregation in the MN South District to allow women full voting privileges.

In September of 2019, a 50th Anniversary Celebration was held at the MN Landscape Arboretum. 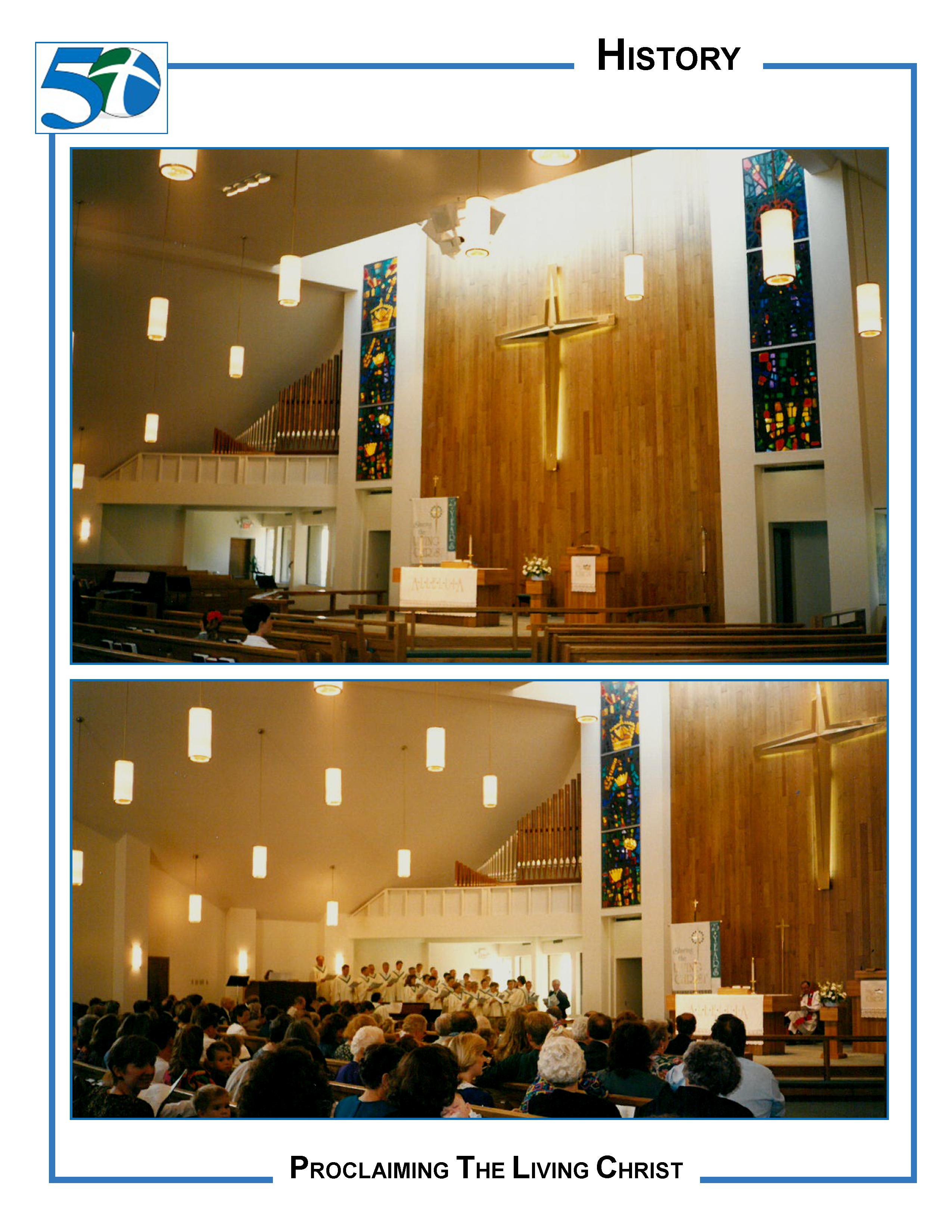 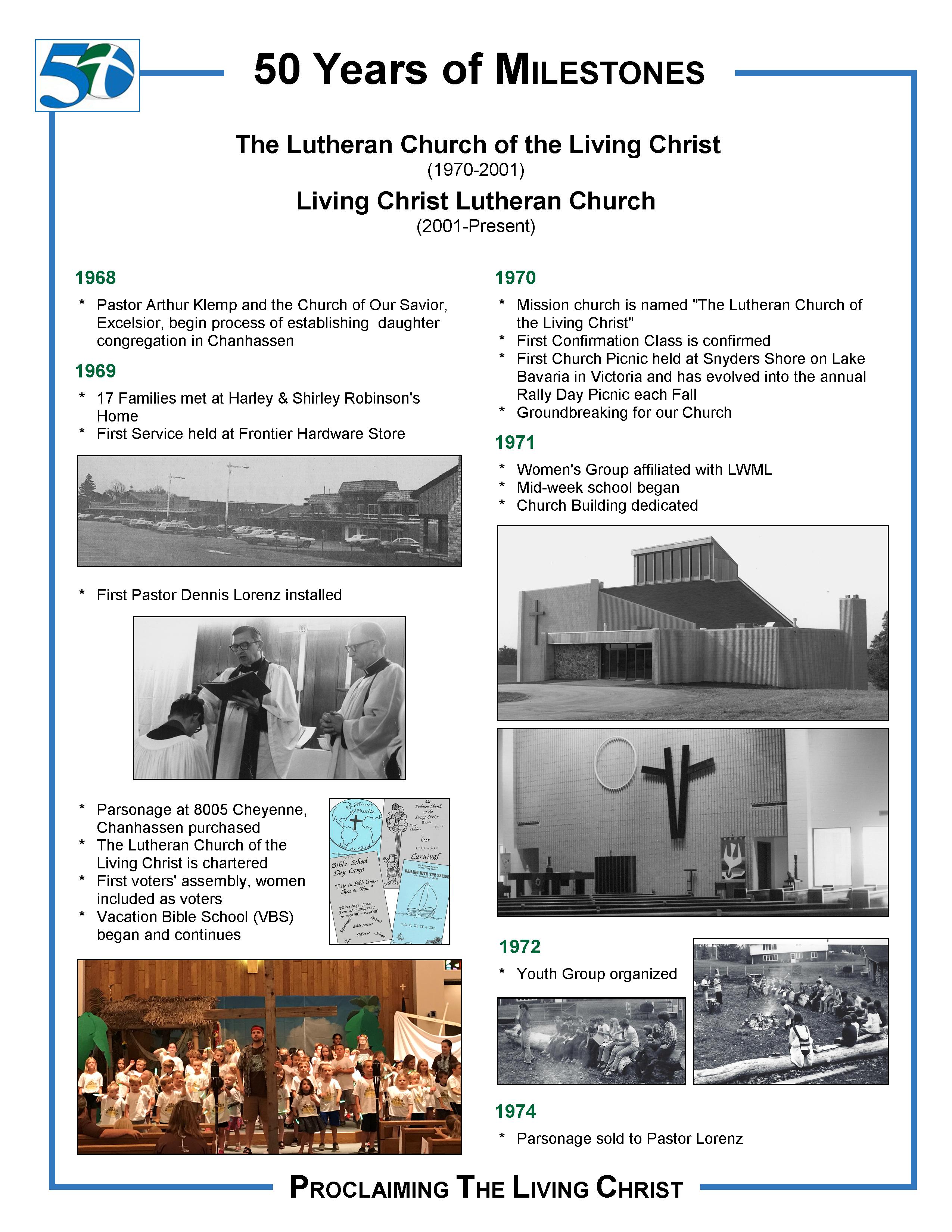 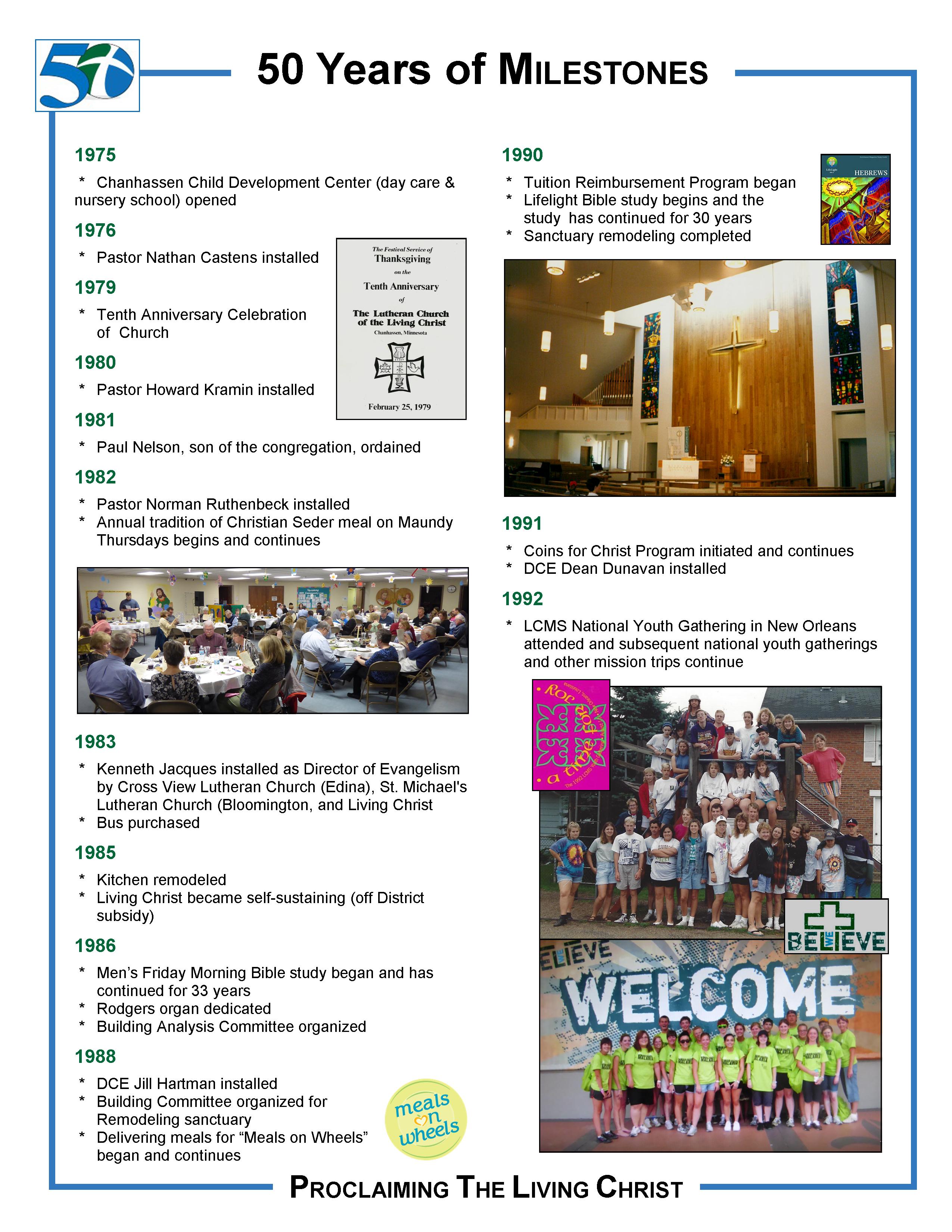 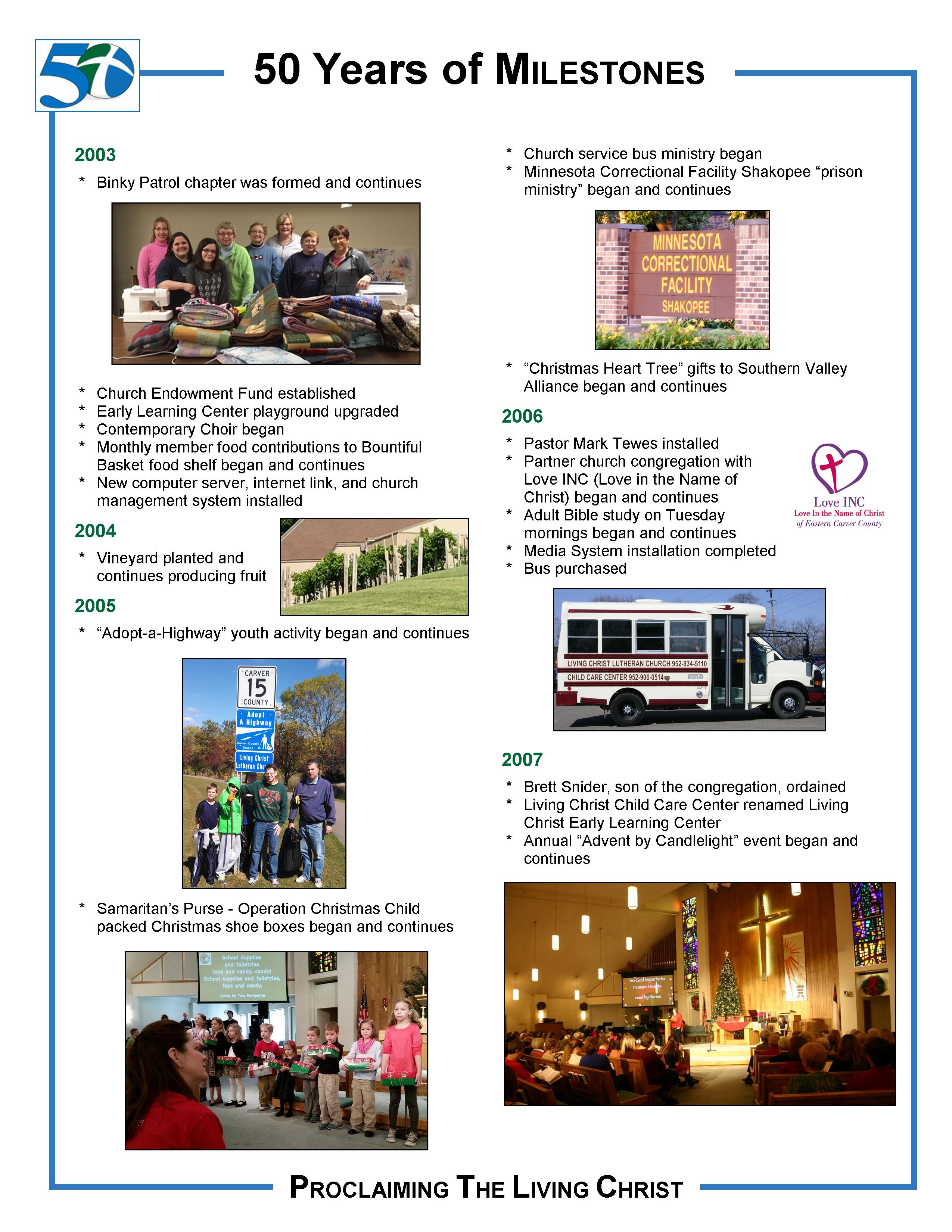 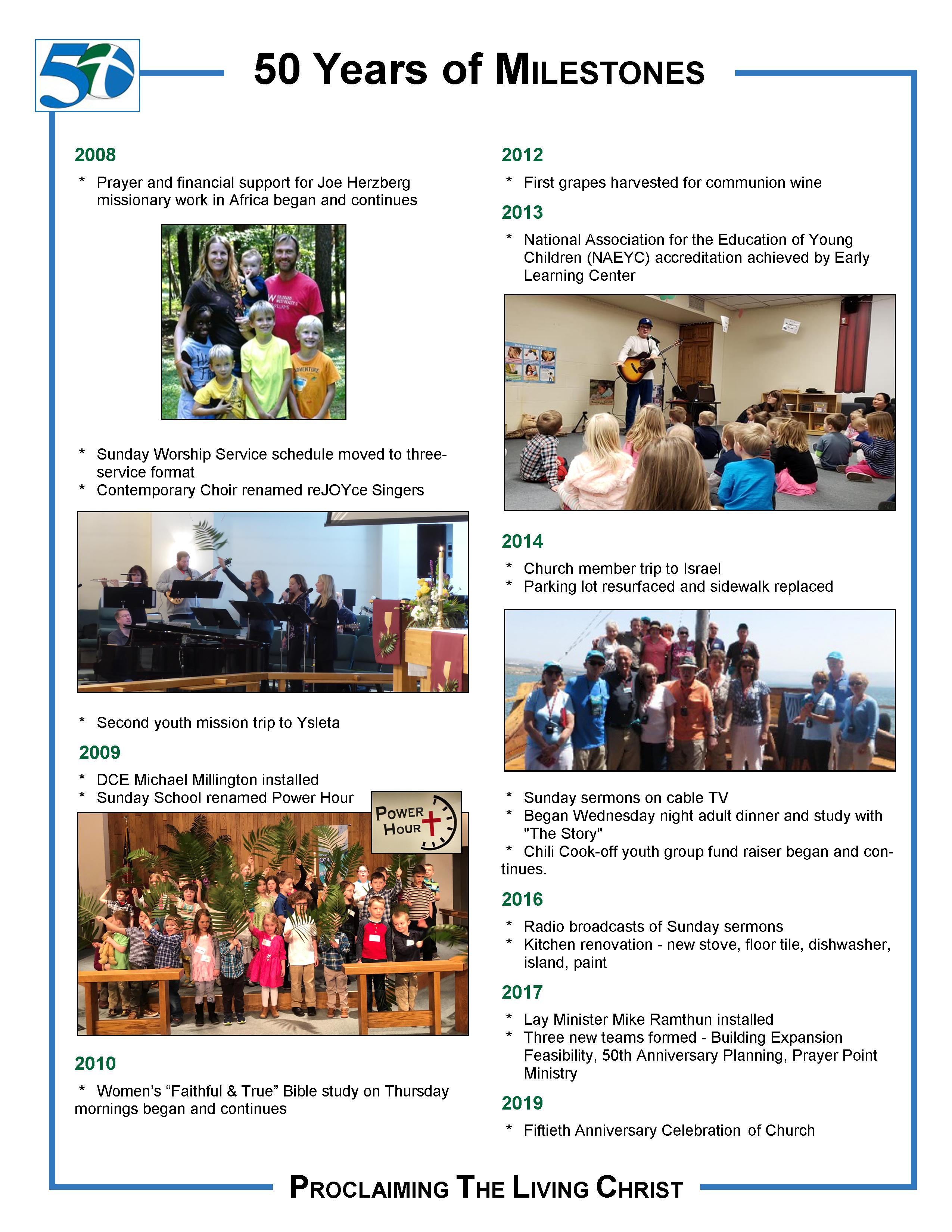